A Coach’s look at coping with COVID-19

A mantra of ‘time to innovate, not hibernate’ has helped Victorian Netball League (VNL) coach Tim Smith deal with the COVID-19 pandemic as his sport, and the rest of Victoria, now turns its attention to returning to play.

Currently in his 17th year as a netball coach and leading the Ariels in the VNL, Smith began his career at community level in less than auspicious circumstances.

“I was just a Dad who was handed the kit bag one morning when there was nobody else available to coach. When I asked ‘why me?’, the response was that I was the only adult there with runners on,” Smith said.

“However, from that point on I developed a passion to support young athletes and help them realise that ‘there is always more in you than you think’.”

Just four months ago, Netball Victoria were discussing the Ariels’ gruelling pre-season camp and the team’s expectations ahead of the 2020 season but their campaign, like all winter sports in Victoria, was cast into the unknown following the arrival of COVID-19.

Smith’s role as coach remained just as important though and he immediately went to work with the aim of maintaining routine and providing the best possible wellness support to his athletes. 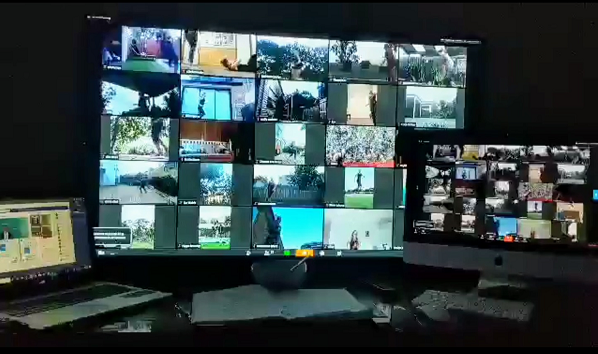 “My first post on social media went to our coaching group just 24 hours after the shutdown and it focused on the importance of this being ‘time to innovate, not hibernate,’ Smith said.

“My daughter had been using Zoom as a conferencing tool for university and within a couple of days, we had 55 athletes and coaches together online. Everyone was in uniform at the same time as regular practice would have been and we all participated in a guided strength and conditioning session.

“It was a great success with the social connections and peer support between the participants proving just as important.”

Since that first session, the Ariels have also taken part in skills acquisition, footwork and wellness training with the aim to keep the athletes as engaged as they normally would be as well as occupied from concerns that may arise outside the netball environment.

Smith has also been able to utilise his time for some personal development.

“Heading out of the restrictions, I became aware of my own mental load and the need to re-centre. As a coach, your own development often comes last but the down-time has provided me the opportunity to focus on completing the Elite Coach phase of the Netball Victoria Development pathway which has definitely supported my growth as a coach.”

Netball was one of the first sports that was able to return to training once the initial restrictions were eased and while the rules were a bit different in terms of maintaining social distancing, sanitising balls and the use of facilities, Smith believes that change came at just the right time.

“Heading back to training certainly gave a boost to the overall morale of our group. I was initially frustrated at the time it took get the approval to start training but when put into practice, it became obvious that the protocols set by Netball Victoria were first class and a necessity to provide the best opportunity to eventually get back to match play.

“Netball is theoretically a non-contact sport so our current focus has been on efficiency of confined space movement and court link-ups.”

While increased restrictions at the end of June have temporarily halted plans for the gathering of larger groups across the state, Smith is aware of the challenges that his team and sport face while still looking forward to the ultimate goal of returning to competition.

“As coaches and athletes, we have had to be adaptive and innovative with our training programs and will continue to do so. The pressure is building to get back to match play and that is certainly our focus once restrictions are further lifted.”